Arizona bark scorpions are a common sight in the desert regions of the southwestern United States, including Arizona, New Mexico, and parts of California and Texas. These venomous arachnids are known for their slender bodies, long pincers, and distinctive, striped tail that holds their powerful venom gland. While they may look intimidating, Arizona bark scorpions are actually quite timid and only sting when threatened or provoked. However, their venom can be dangerous, especially for young children, the elderly, and those with compromised immune systems.

How to Identify an Arizona Bark Scorpion

Arizona bark scorpions are the most venomous scorpions in the United States, and they are also one of the easiest to identify. These arachnids have a slender, elongated body that ranges in color from light yellow to dark, burnt orange. They have four pairs of legs and a pair of large, pincer-like pedipalps, which they use to catch and crush their prey. The most distinctive feature of Arizona bark scorpions is their long, thin tail, which is often striped with pale bands and end in a venomous stinger.

Arizona bark scorpions are nocturnal creatures, which means they are most active at night. They are also highly adaptive and can be found in a variety of habitats, including deserts, grasslands, and even urban areas.

They are most commonly found in the crevices of rocks, trees, and other natural debris, but they are also known to seek shelter in dark, damp places, such as underneath logs, inside rodent burrows, and even in the clutter of human homes and buildings.

If you see a small, slender scorpion with long pincers and a striped tail, it is likely an Arizona bark scorpion. It is important to be cautious around these creatures, even if they are not actively displaying aggressive behavior. If you are unsure if a scorpion is an Arizona bark scorpion, it is best to assume that it is and take appropriate precautions. 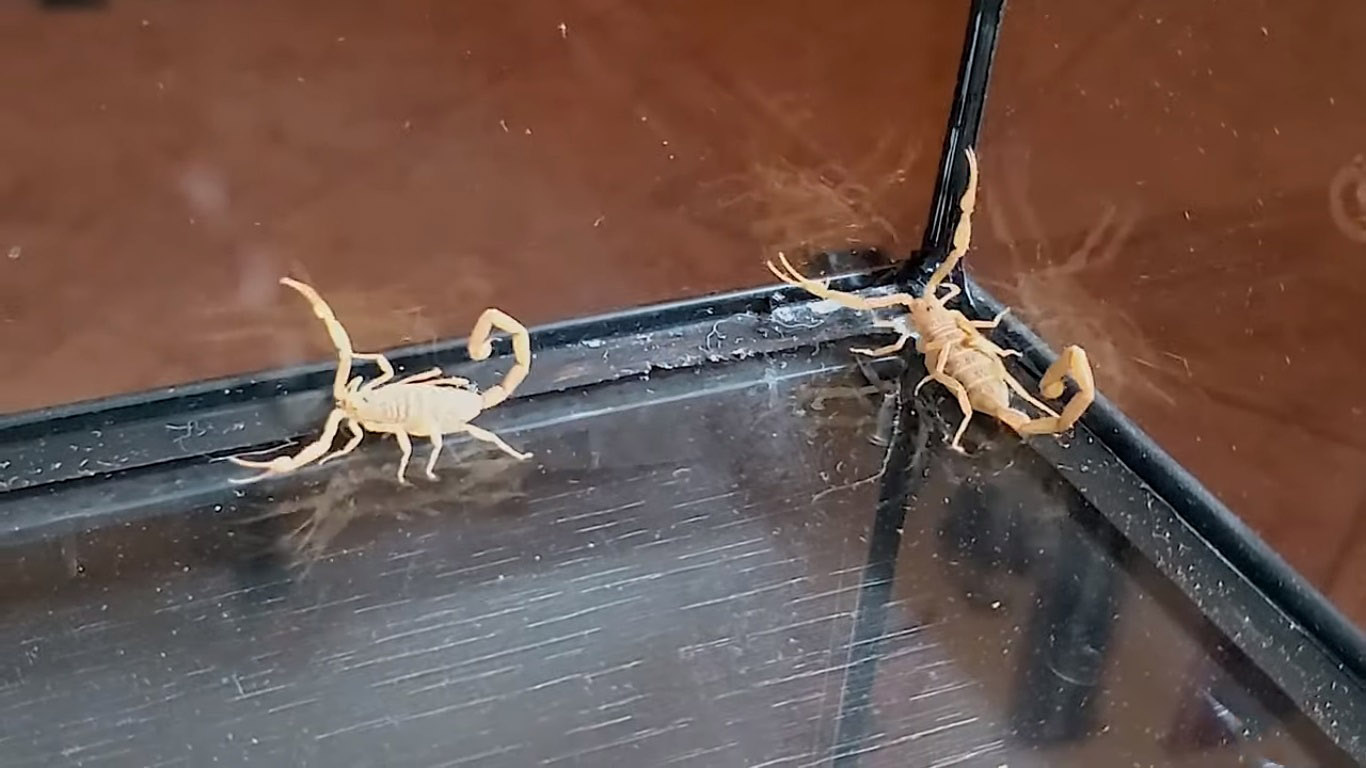 What is the Toxicity of Arizona Bark Scorpion Venom?

Arizona bark scorpion venom is considered to be the most toxic of all scorpion venom in the United States. However, it is important to note that the severity of a bark scorpion sting can vary greatly depending on the individual being stung. Some people may experience only mild symptoms, while others may have a more severe reaction, requiring medical attention.

The venom of an Arizona bark scorpion contains a variety of neurotoxins that can affect the nervous system, causing symptoms such as numbness, tingling, and muscle twitching.

It can also cause respiratory distress, leading to difficulty breathing, and in severe cases, coma or death. Children, the elderly, and those with compromised immune systems are most at risk for experiencing severe reactions to Arizona bark scorpion venom. 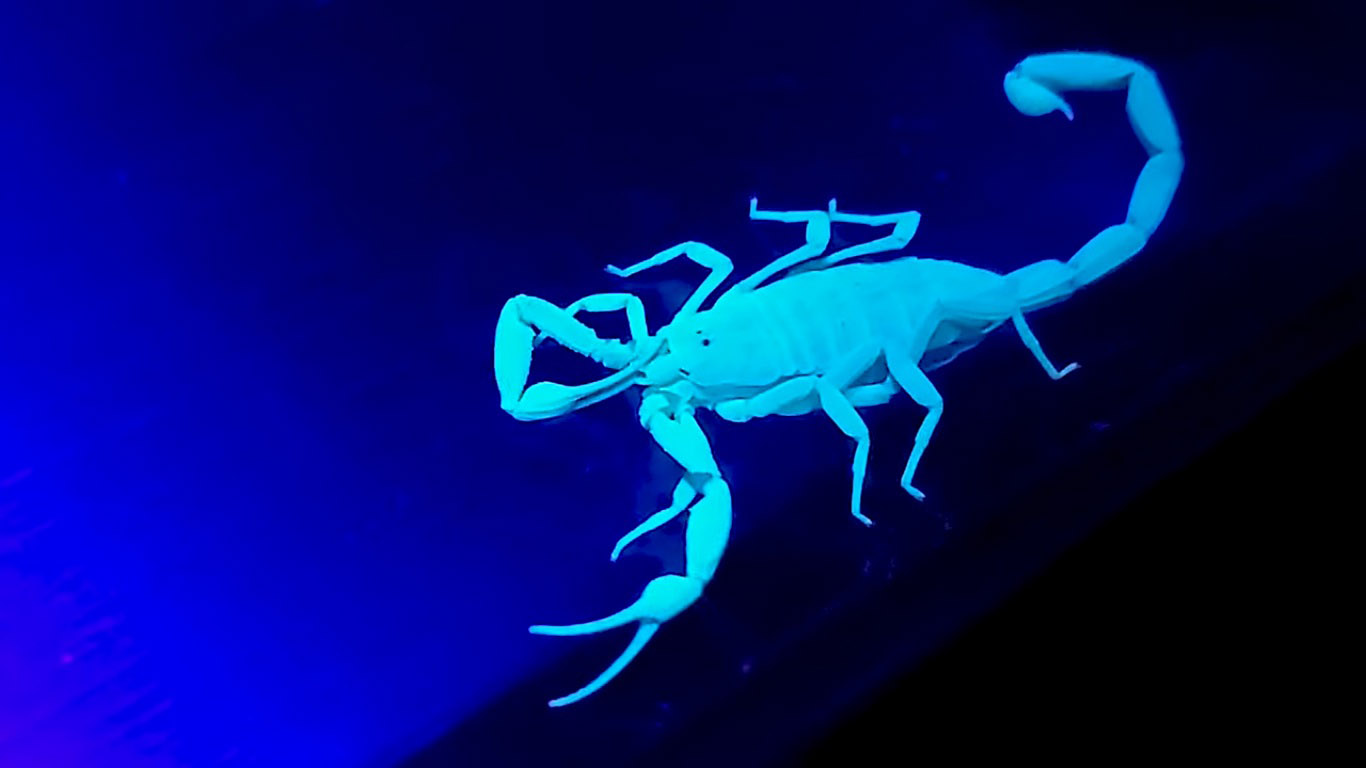 Can an Arizona Bark Scorpion Kill You?

Arizona bark scorpions are venomous, not poisonous. Venom is a toxic substance that is injected into a victim through a bite or sting, while poison is a toxic substance that is ingested or absorbed through the skin. While venomous animals, such as Arizona bark scorpions, can cause serious harm or even death if they inject their venom into a victim, they are not poisonous and do not pose a risk simply by being touched or handled. 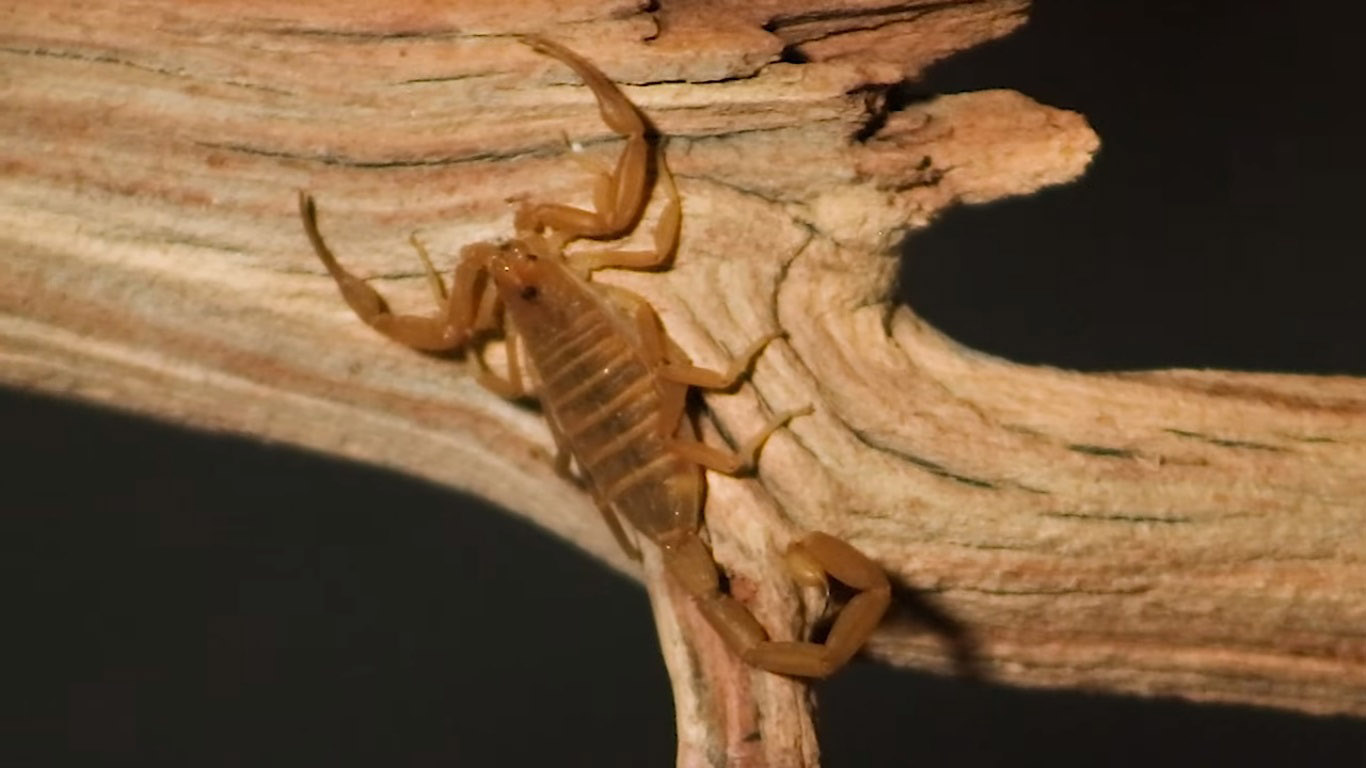 What Should You Do If You are Stung by an Arizona Bark Scorpion?

If you are stung by an Arizona bark scorpion, the first thing you should do is remain calm and try to stay still. Movement can cause the venom to spread more quickly through your body, increasing the severity of your reaction. If the scorpion is still attached to your skin, gently remove it with a pair of tweezers, being careful not to squeeze the venom gland. Avoid squeezing the sting itself, as this can also inject more venom into your body.

After removing the scorpion, wash the sting site with soap and water to help prevent infection. Apply a cold compress to the area to help reduce swelling and numb the pain. If you are experiencing difficulty breathing, chest pain, or severe muscle twitching, seek immediate medical attention. 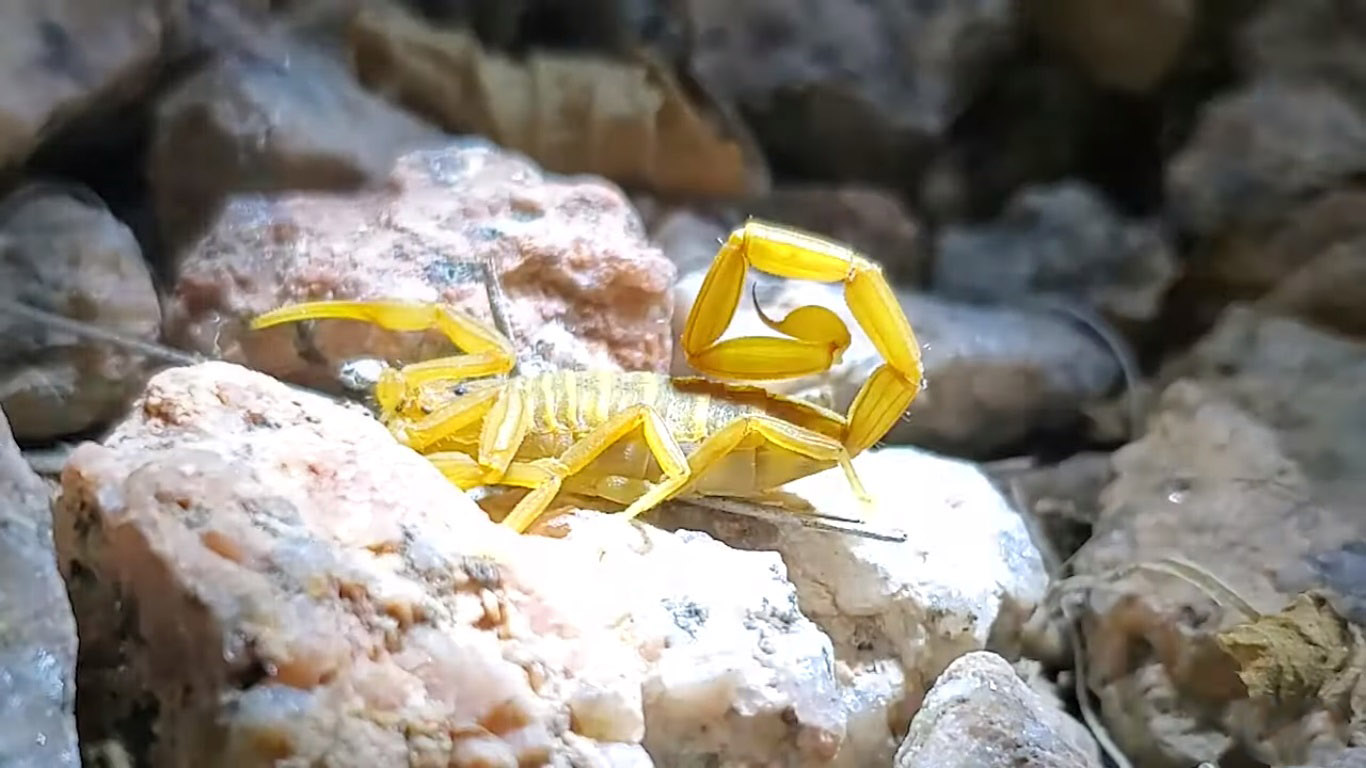 If you are experiencing mild to moderate symptoms from an Arizona bark scorpion sting, such as numbness, tingling, or muscle twitching, you may be able to treat your symptoms at home. Over-the-counter pain medications, such as acetaminophen or ibuprofen, can help to reduce pain and swelling.

Applying a topical cream or ointment, such as hydrocortisone, can also provide some relief. If your symptoms persist or worsen, seek medical attention.

If you are experiencing severe symptoms from an Arizona bark scorpion sting, such as difficulty breathing, chest pain, or extreme muscle twitching, it is important to seek medical attention immediately. You may need to be treated with medications, such as antivenom, to neutralize the venom and reduce the severity of your reaction.

If your dog has been stung by an Arizona bark scorpion, it is important to seek veterinary attention as soon as possible. Dogs are much more sensitive to scorpion venom than humans and are at higher risk for severe reactions. Your veterinarian may prescribe medications, such as antivenom, to neutralize the venom and treat your dog’s symptoms. They may also recommend pain medication and supportive care, such as IV fluids, to help your dog recover.

How to Keep Arizona Bark Scorpions Out of Your Home

There are several steps you can take to help prevent Arizona bark scorpions from entering your home: 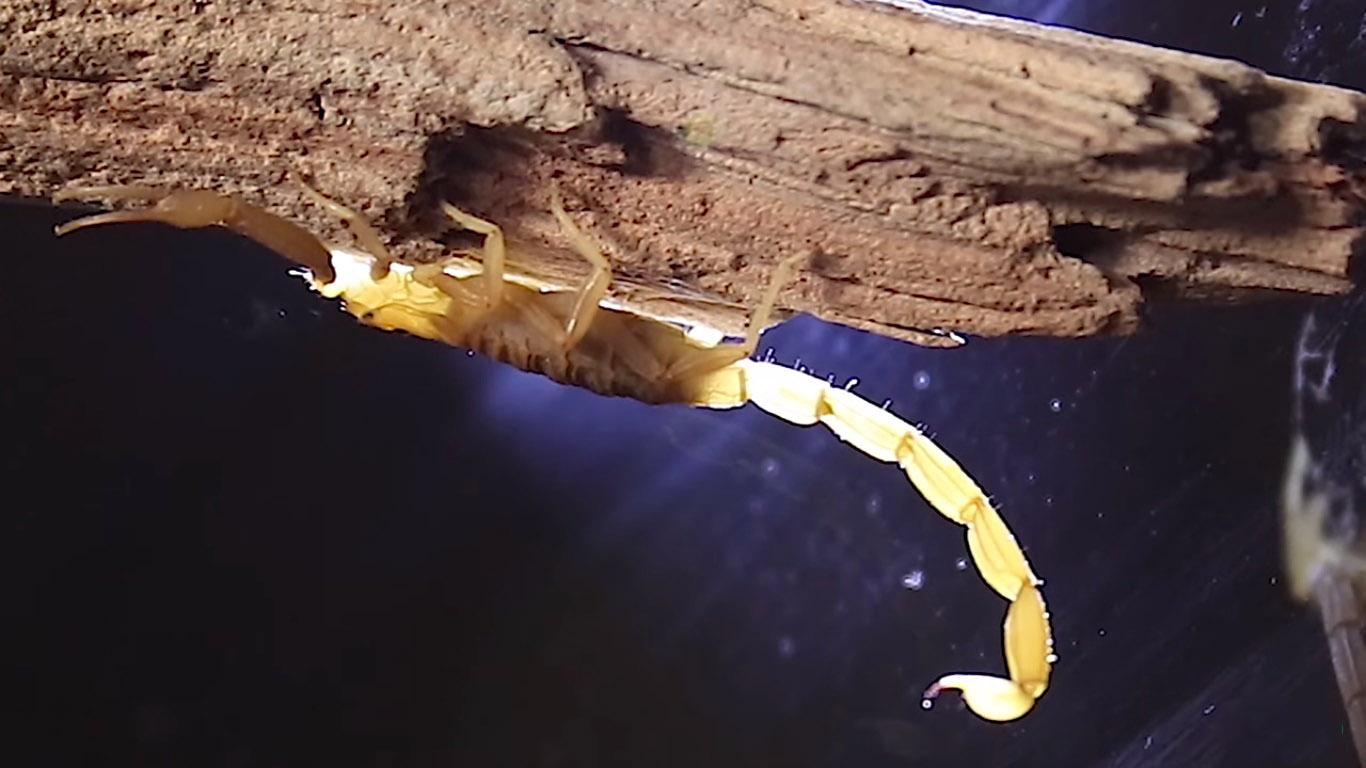 Tips for Staying Safe While Outdoors in Arizona

If you are spending time outdoors in Arizona, particularly in desert or grassland areas, it is important to take precautions to avoid coming into contact with Arizona bark scorpions:

If you have pets that spend time outdoors, it is important to take steps to protect them from Arizona bark scorpion stings: 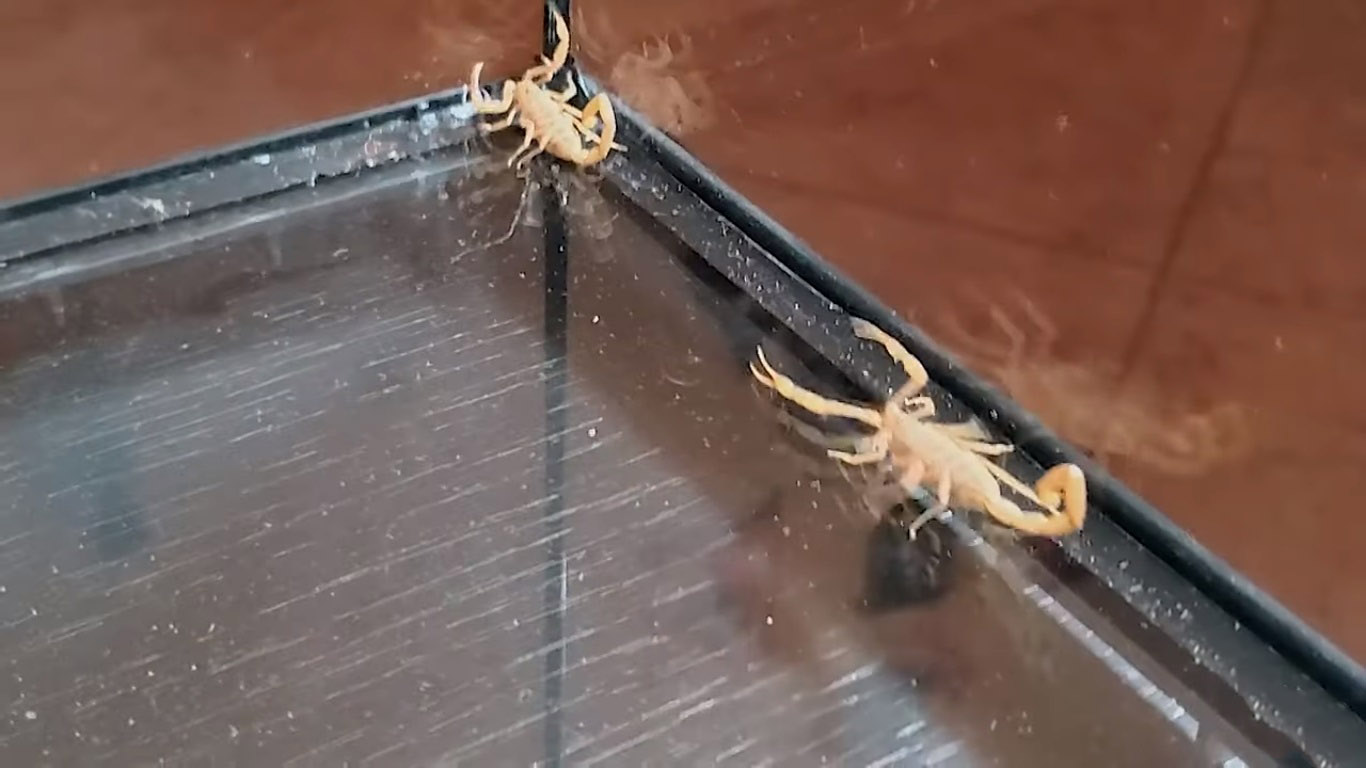 As an exotic pet expert with over a decade of experience, I have had the opportunity to work with a variety of venomous animals, including Arizona bark scorpions. While these creatures may look intimidating, they are actually quite timid and will only sting when threatened or provoked. Here are a few non-obvious tips I’ve learned over the years for dealing with Arizona bark scorpions:

I hope these tips are helpful for anyone who may encounter Arizona bark scorpions in the future. Remember, while these creatures can be dangerous, they are also an important part of the desert ecosystem and deserve our respect and care. By following proper safety precautions and treating scorpions with kindness, we can coexist peacefully with these fascinating creatures.

Arizona bark scorpions have a distinctive appearance that makes them easy to recognize. They are typically light to medium brown in color, with a thin, elongated body and long, slender legs. They have two pincers or claws on the front of their body, and a venomous stinger on the end of their tail. Arizona bark scorpions can grow to be 3-4 inches long, with a tail that is about the same length as their body. They also have a pair of simple eyes and several pairs of more complex eyes on the top of their head.

What do Arizona bark scorpions eat?

Arizona bark scorpions are nocturnal predators that feed on a variety of insects and other small animals. They are opportunistic feeders and will eat whatever prey they can catch, including crickets, beetles, grasshoppers, and even small lizards and rodents. They use their pincers to catch and hold their prey, and their venomous stinger to subdue and kill it. Scorpions are also able to go long periods of time without food and will only eat when prey is available.

Where are Arizona bark scorpions found?

Arizona bark scorpions are found in the desert regions of the southwestern United States, including Arizona, New Mexico, and parts of California and Nevada. They are adapted to living in arid, desert environments and are often found in rocky areas, grasslands, and along the banks of rivers and streams. They are also known to inhabit buildings and other human structures, particularly in areas where they can find food and shelter.

Arizona bark scorpions are venomous arachnids that are found in the desert regions of the southwestern United States. Their venom can cause a range of symptoms, including numbness, tingling, and muscle twitching, and in severe cases, difficulty breathing, chest pain, and coma or death. While fatalities from Arizona bark scorpion stings are rare, it is important to seek medical attention if you or a loved one is stung, especially if you are experiencing severe symptoms or are at high risk for complications.