The Ball Python is one of the most popular snakes in the pet trade. They are docile, easy to care for, and come in a variety of colors and patterns. These snakes make great pets for both first-time snake owners and experienced herpetoculturists alike! 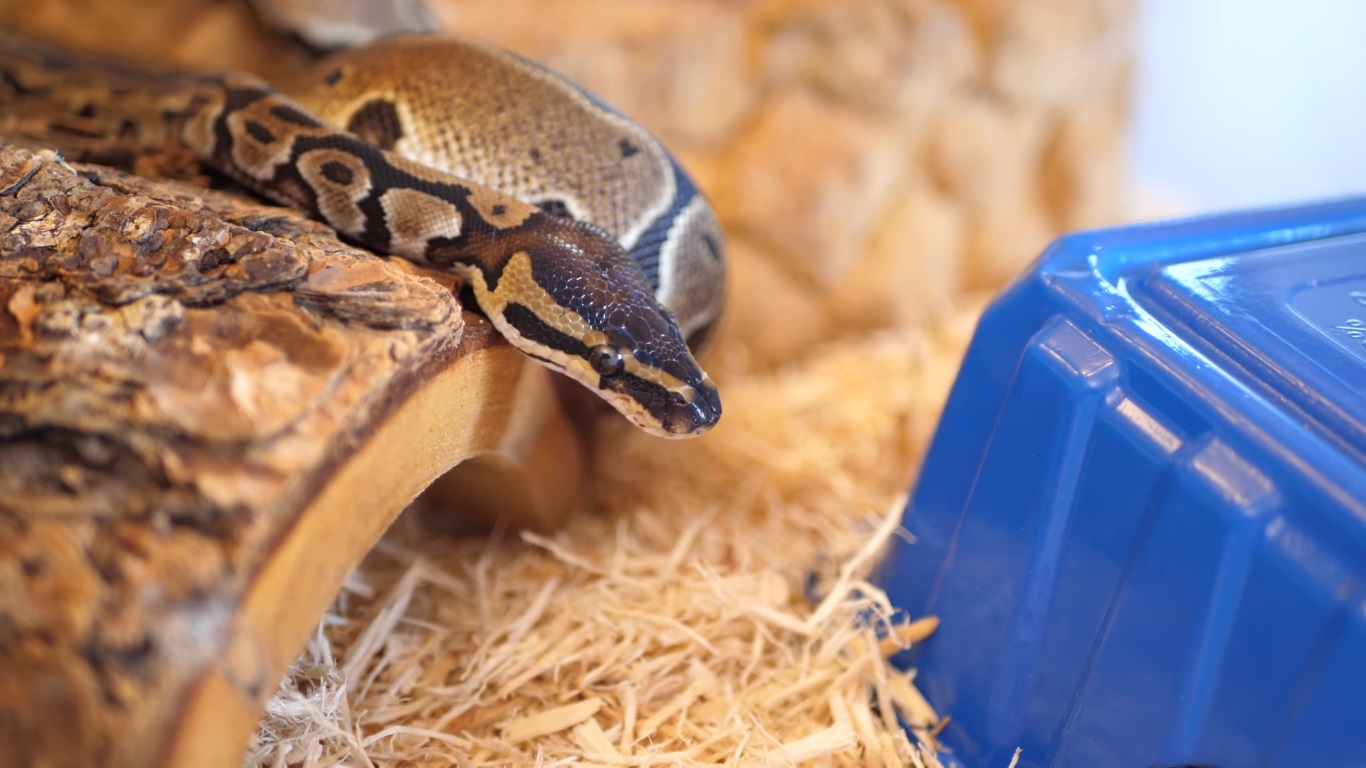 How to Care for a Ball Python?

If you are thinking about adding a Ball Python to your family, there are a few things you need to know before you get started. Here is a guide on how to care for your new pet:

Ball Pythons are some of the most beautiful snakes in the world. They typically have a black and yellow or olive-colored base with brown patches, called ‘blotches’ along their back. Some Ball Pythons also features striking patterns such as stripes or diamonds on their scales. The eyes of these snakes come in shades of black, brown, yellow, or red. The head of the snake is usually small and rounded.

Ball Pythons, on average, grow to between 3 and 5 feet long in adulthood. Females tend to be slightly larger than males. Some individuals can even reach lengths of 6 feet!

How to Identify Ball Python?

There are several characteristics that can help you identify if your pet is a Ball Python. One of the easiest ways to tell is by looking at their scales; these snakes feature brown patches, or ‘blotches’, along their back as well as striking patterns like stripes or diamonds. The head of the snake is usually small and rounded. The eyes of this species are black, brown, yellow or red.

Another way to identify a Ball Python is by its size; these snakes typically reach between 3-5 feet in length (although some can grow up to 6 feet). Females tend to be larger than males on average. Finally, the coloration of your snake can be a good indicator; these snakes typically have a black-and-yellow or olive-colored base. 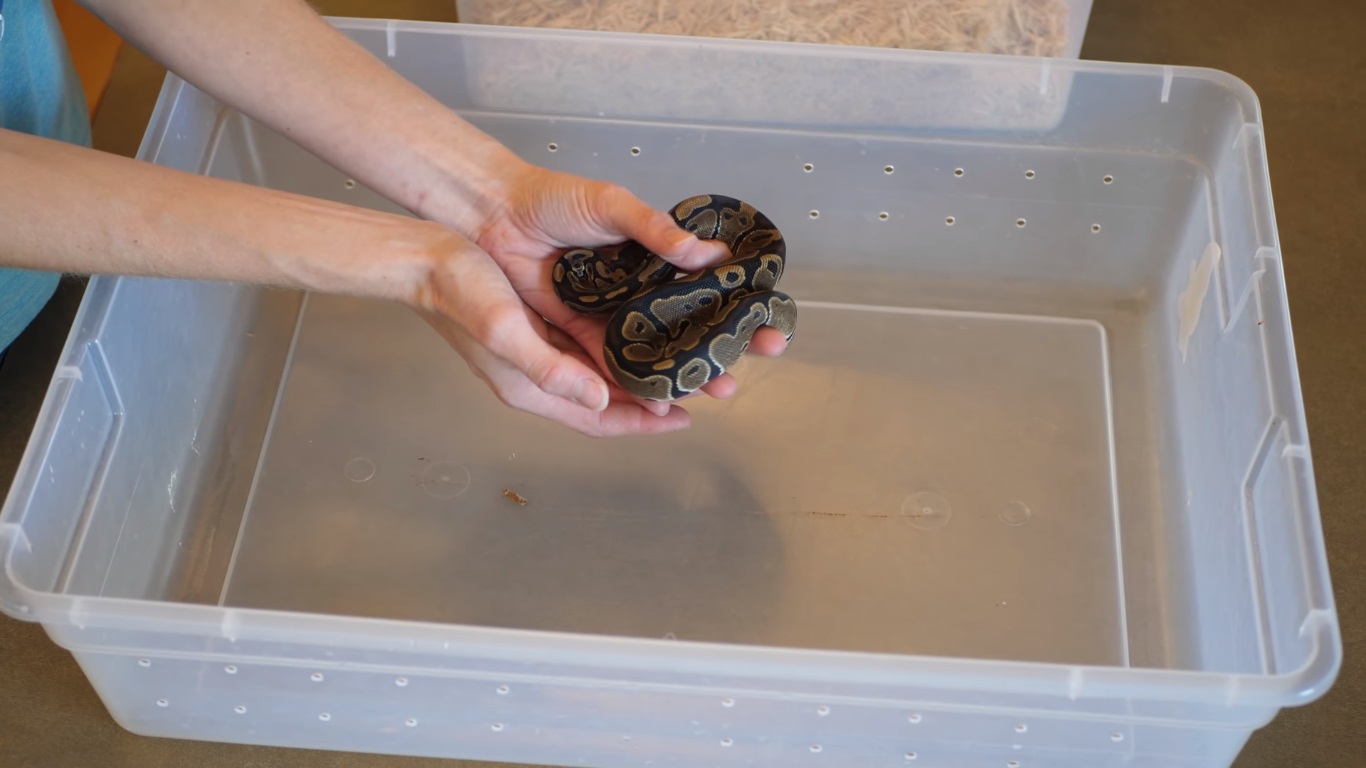 How Long Does a Ball Python Live?

A ball python can live for an average of 20-30 years in captivity. However, some individuals have been known to reach 40 years or more with proper care and diet. In the wild, their lifespan is much shorter due to predation, disease, and other environmental factors.

The lifespan of a ball python in captivity is largely affected by its care and diet. It is important to provide an enclosure that allows the snake to move freely, as well as a high-quality diet with variety to prevent malnutrition.

A regular routine for feeding, cleaning, and handling should also be established for optimal health. Additionally, regular veterinary check-ups are important to ensure the snake is healthy and free from disease or parasites.

With proper care, a ball python will live for an average of 20-30 years. If given optimal care and nutrition, some individuals have been known to reach 40 years or more.

How Does Ball Python Reproduce?

Males and females will engage in a behavior called ‘courtship’ in order to reproduce. Courtship involves the male snake rubbing his chin on the female snake’s head and neck. If she is receptive, she will allow him to coil around her and they will mate. After mating, the female ball python will lay eggs and coil around them until they hatch. The average clutch size is 15-25 eggs, but can range from 2-60 eggs depending on the size of the female.

The life cycle of the ball python (Python regius) begins with a gestation period of around 46 to 73 days. After this, an average clutch size of five eggs is produced and incubated for 45-55 days until they hatch. The newly hatched baby pythons are typically 6-10 inches in length. In their first year, they will grow rapidly, expanding to an average of about 2-4 feet in length.

As the ball python grows older (2–3 years old), its growth rate slows down and eventually stops as it reaches a maximum size of 3-5 feet. It is important to provide proper nutrition during this period, as malnutrition can affect the snake’s overall health and growth rate.

Once it reaches adulthood, the ball python no longer grows in size but instead lives off of the energy stored in its fat reserves throughout its life. 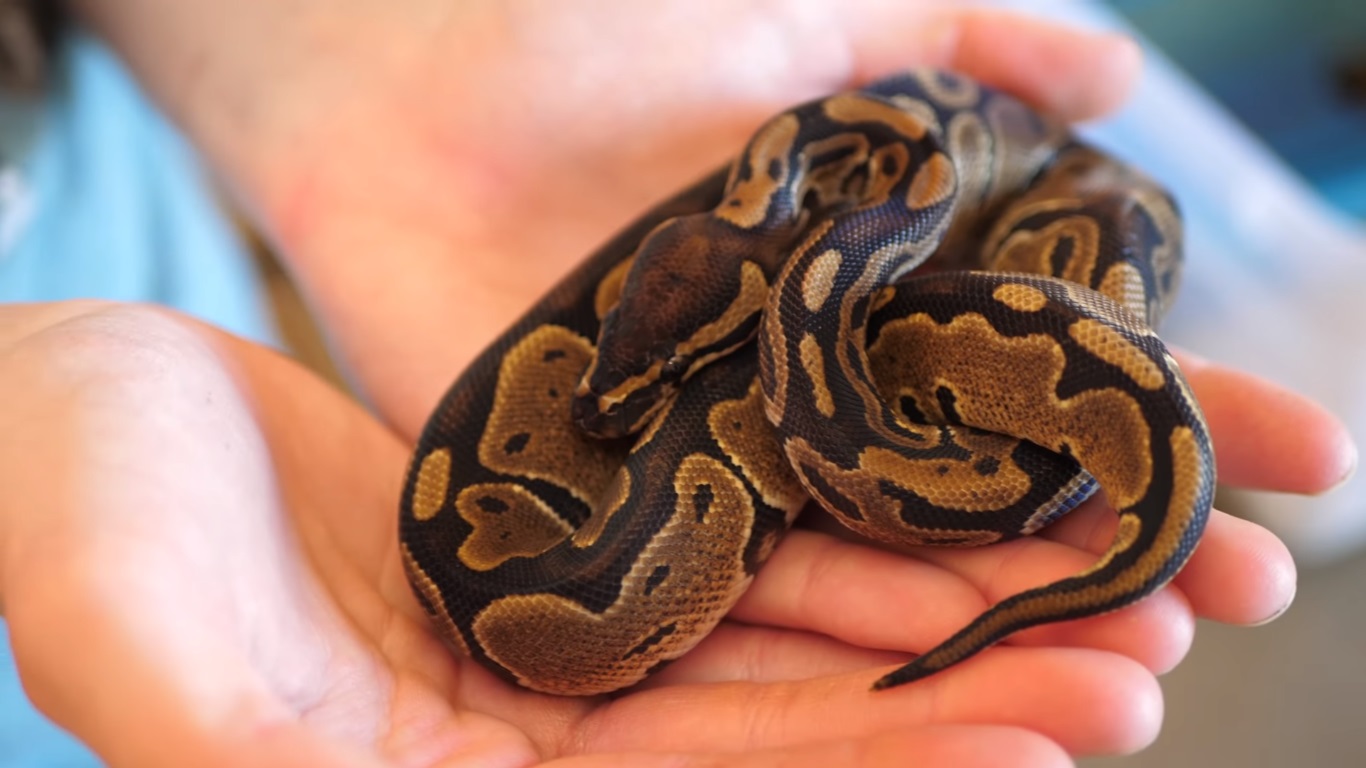 In the wild, ball pythons are typically shy and secretive animals that prefer to avoid confrontation. They will often flee when confronted by humans or other predators, but they can also be aggressive when cornered. captive bred snakes tend to be tamer than those taken from the wild.

Can I Keep a Ball Python as a Pet?

Yes, ball pythons can make excellent pets for experienced and novice snake keepers alike. They are relatively easy to care for, docile in nature, and require only a few basic supplies. It is important to research the proper housing requirements, diet, and husbandry practices before taking on the responsibility of owning a pet ball python.

How to Feed a Ball Python?

What Does the Ball Python Eat?

The ball python’s diet consists primarily of small mammals, such as mice and rats. They will also occasionally eat small birds and lizards. Wild ball pythons tend to hunt at night, while captive snakes may feed during the day or at night depending on their owner’s preference.

It is important to only feed your snake pre-killed prey, as live animals may harm your pet. Additionally, be sure to only feed prey items that are appropriately sized for your snake’s age and size. Overfeeding can lead to health problems, so it is important not to overfeed your ball python.

How Often to Feed Ball Python? 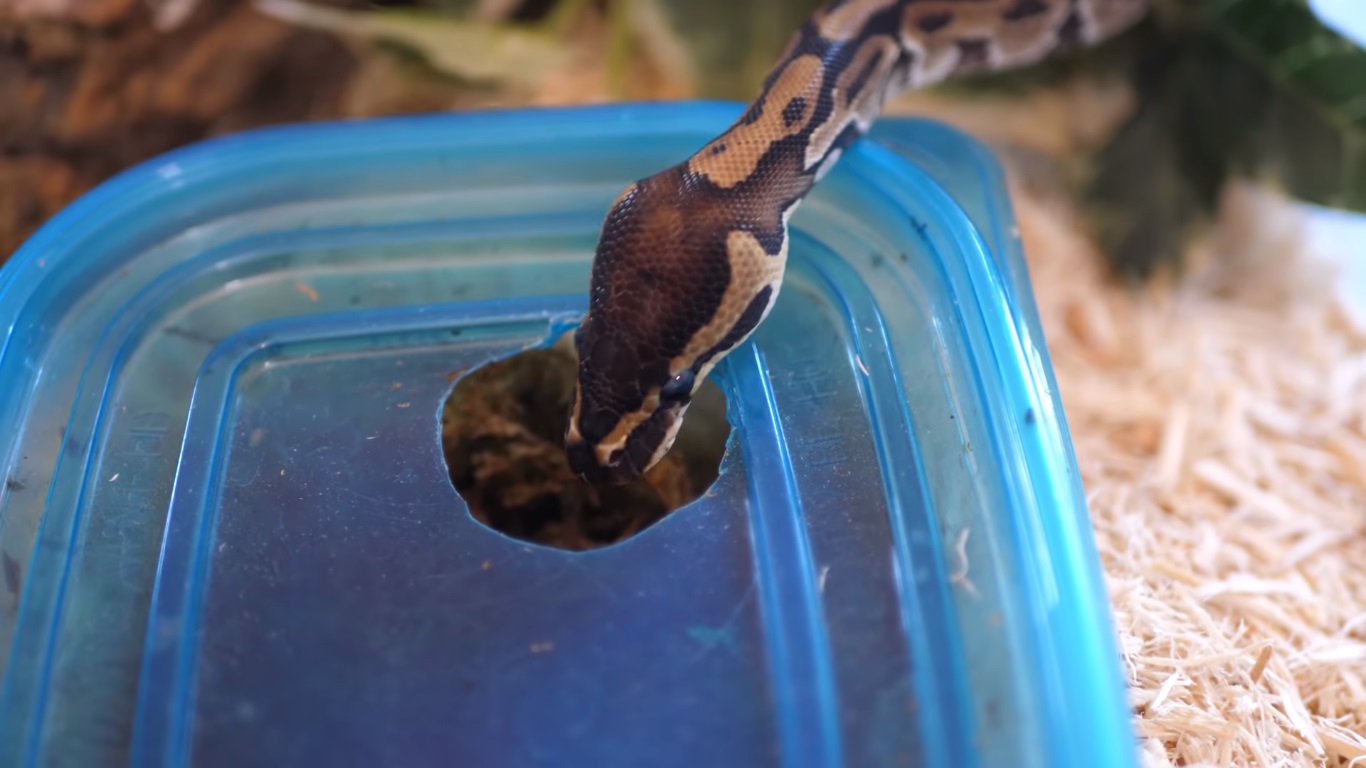 The Danger of Ball Python

Ball Pythons are not venomous snakes and they will not kill you, but that does not mean that they are harmless. In fact, Ball Pythons can be very dangerous if you do not know how to handle them properly.

Is a Ball Python Poisonous?

No, a Ball Python is not poisonous. While most snakes are venomous and can inject their toxin into you through a bite, this is not the case with Ball Pythons. Although they do have teeth, these are too small to penetrate human skin and therefore cannot inject any venom when biting. As such, Ball Pythons are generally not considered to be a dangerous species of snake.

Can You Die From a Ball Python Bite?

No, you cannot die from a Ball Python bite. As previously mentioned, Ball Pythons do not have the ability to inject venom into their prey or predators through biting as most other snake species can. Therefore, while you may experience some mild pain and irritation from a bite, there is no risk of death associated with it.

Can a Ball Python Bite You?

Yes, a Ball Python can bite you if it has become stressed, agitated, or scared. It is important to remember that Ball Pythons are wild animals and will react instinctively when threatened. As such, they may attempt to defend themselves through biting if they feel they are in danger. It is therefore very important not to handle your pet too roughly and to be aware of their moods and body language, as this will help prevent bites from occurring.

Ball Python bites can hurt, although the level of discomfort and pain experienced will be different for each person. Generally speaking, a Ball Python’s bite may feel similar to an insect bite with mild stinging and localized swelling. However, there have been cases where people have reported more intense levels of pain due to their pet’s bite. 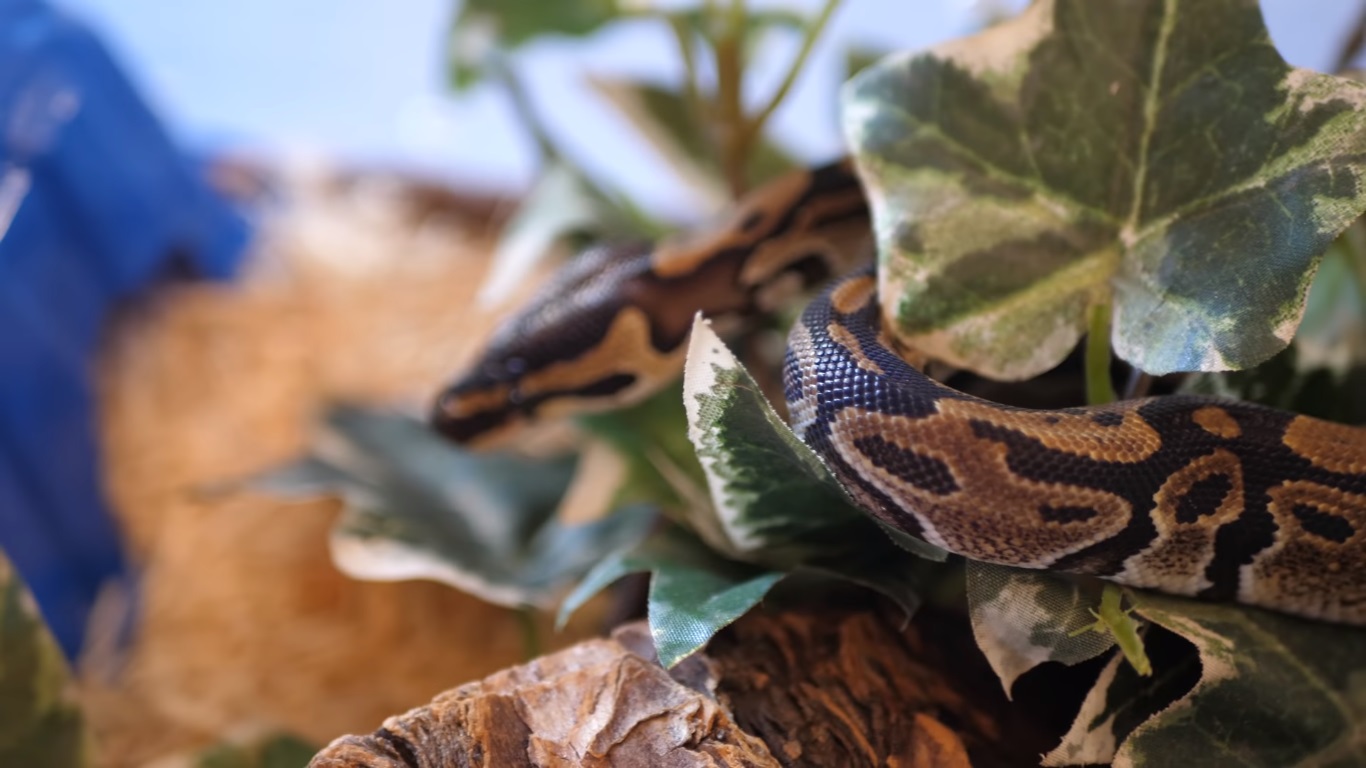 The Housing of Ball Python

Ball Pythons are relatively small snakes and therefore do not need large enclosures. A 20-gallon tank is a good size for an adult Ball Python, as it will give them enough space to move around and explore its environment. It is important to make sure that the enclosure has a tight-fitting lid with secure locks, as this will help prevent escapes.

Heating and Lighting for a Ball Python

When it comes to heating and lighting for a Ball Python, there are a few things to keep in mind. Ball Pythons prefer cooler temperatures and should be kept in an environment that is between 70 and 80 degrees Fahrenheit. You can provide this temperature by using a heating pad underneath the tank or by installing a reptile heater.

Additionally, you will need to provide your Ball Python with some form of light. This can be done either by using a full-spectrum light bulb or by placing the tank in an area where it will receive natural sunlight.

What are Common Health Problems of Ball Python?

Common health problems that may affect Ball Pythons include respiratory infections, mites, and parasites. Respiratory infections can be caused by a variety of factors including poor husbandry practices, stress, and overcrowding in the enclosure. Signs of infection include wheezing, bubbling noises while breathing, and open-mouthed breathing (while sleeping).

Mites are another common health concern for Ball Pythons and can be identified by their tiny black or brown bodies crawling around the skin of the snake. Mites feed on your pet’s blood which can cause irritation and irritation, as well as anemia if left untreated. If your Ball Python has mites, it is important to take them to a veterinarian for treatment.

Finally, parasites are another potential health concern for Ball Pythons. Signs of parasitic infection include diarrhea, weight loss, lethargy, and lack of appetite. It is important to take your pet to the vet for a fecal analysis if you suspect they may have parasites, as this will help identify the type of parasite and allow treatment to begin.

In conclusion, Ball Pythons are a wonderful and unique species of snake that make great pets. They are relatively easy to care for, although it is important to keep in mind their needs when it comes to housing and temperature requirements. Additionally, Ball Python bites can hurt but generally pose no serious health risks. With the right care and attention, your Ball Python can remain healthy and active for many years to come.